Truck power inverters are an important part of any truck driver’s equipment. There are many things to be aware of when selecting a truck power inverter, and there is also the question of what you will plug into it. Some items require more amps than others, and some things can damage an HGV truck wiring if they are plugged in. In this article, we will discuss how to select the right inverter for your needs, as well as tips on how not to damage an HGV truck wiring when plugging devices into an installed power inverter!

Why Would a Truck Driver Want a Power Inverter?

Truck driving is a great career but when parked up for the night or on rest periods Truck power inverters are a great accessory. A power inverter will allow truckers to use household appliances in their truck which can very practical and also save them money.

Truck drivers these days are getting more switched on to service area prices, the cost of truck parking, food, and amenities. All of which can make truck driving very expensive and impractical.

Having a truck power inverter installed will allow truckers to have household luxuries inside their truck cab which makes parking in a lay-by much more comfortable and a more affordable option.

Amazingly you can power devices such as a Truck TV, Kettle, Cooker, Fridge, Microwave Oven, X-Box, Playstation, Laptop, Lighting, and much more!

Things To Consider Before Using a Truck Power Inverter?

When looking for a power inverter for your truck you need to know some important things.

Firstly it is important to know what appliance or appliances you want to use.

Once you establish what appliance you want to use in your truck, it will be important to know the power consumption the item will need and the amps that it will require.

The reason that amps are important is it is necessary to know if you can plug the inverter into the 24v power socket built into the truck or if you need to wire the inverter to the truck’s batteries directly.

Most 24v sockets inside your truck will be rated at approximately 10 amps, with this in mind it would not be a good idea to plug a power inverter into this port if you are using it to supply a microwave oven and a TV at the same time. Even if your inverter is rated at 40 amps, the socket you have plugged it into will still be 10 amps and you would overload the truck’s 24v socket which will either blow the fuse or melt your wiring in the truck.

If you are using a truck power inverter for just one appliance such as your tv then the amps would be below 10 amp and you can plug it into your internal 24v truck socket on the dash.

Deciding What Wattage Is Required for a Truck Power Inverter

Most inverters these days have built-in protection and a display to show what amps you are using etc.

The small units also come with cables that can be clamped directly to a battery.

If you want a power inverter that will plug into your cigarette lighter, you must choose one that is 450 watts or less.

Larger inverters 500 watts and above should be hard-wired directly to a battery.

The cable size depends on the distance between battery and inverter and will be specified in the power inverter Manual.

When connecting the power inverter to your battery always use an over-current protection device, such as a fuse or circuit breaker, and use the thickest wire available, in the shortest length possible.

Most power inverters for a truck will be either modified sine wave or pure sine wave, so let’s take a look at both options and see the difference between the two.

The name pure sine wave inverter is derived from the waveform of its output.

This pushes out the same power or replicates as closely to your regular home’s power socket.

Most electronic products are designed to be powered by mains, pure sine wave inverters are suitable for all applications, especially motorised devices where it is proven that pure sine wave power will lengthen the product’s lifetime and run much quieter and more efficient.

This type of power inverter is best suited for delicate items that require an uninterrupted power supply such as a laptop, TV, or audio equipment. This type of inverter will obviously be able to power all items in your truck if it is the correct wattage and amperage. British Trucking would highly recommend a pure sine wave inverter for a truck if it is within your budget.

Modified sine wave inverters are named after their waveform output.

The output of the modified sine wave inverter cycles through positive, ground, and negative voltage to give a similar output waveform to the pure sine wave. The only downside with a modified sine wave is that it introduces harmonic distortion to inductive and audio appliances.

Harmonic distortion is caused by the harsh clipping in the on and off phase changing in voltage.

Modified sine wave inverters are suitable for heat element devices (kettle, heater, etc) they can also be used with devices that have an external or built-in power adaptor (laptops, TVs, etc) as the adapter unlike a standard mains plug, will sort out any harsh clipping before it affects the end device.

Which Truck Inverter Should I Choose Modified Sine Wave or Pure Sine Wave?

The advantage of pure sine wave inverters is that the output voltage waveform is a pure sine wave with very low harmonic distortion and clean power like utility-supplied electricity.

A pure sine wave will prevent crashes in computers.

A Modified sine wave still works well for most devices and is the most common type of inverter because they are a cheaper option.

If you mostly want to power TV, kettle, heater, cooker, fridge, etc, a modified sine wave inverter is still suitable for your trucking needs, but be aware that the power it emits can fluctuate slightly.

How Many Watts Should My Truck Power Inverter Be?

The size power inverter you use will depend on the watts of your chosen appliance. You can find its power consumption by referring to its Specification Plate or sticker.

It is recommended that you purchase a larger power inverter than you think you’ll need with at least 10% to 20% more power than the largest output load.

Eg: If You want to power a Truck Television, Kettle, and light.

For this example, you would minimally need a 780 W inverter, but it would be a good idea to get a larger one, as you may find you need to plug something else in at some time in the future, and wish you had purchased a bigger version.

What is meant by the terms “continuous 2000 watts” and “peak surge 4000 watts”? This is due to some appliances needing a larger amount of power when starting like maybe a power tool or fridge.

Once the appliance is started, the tool or appliance requires less power to continue to operate “continuous load”.

To Convert your appliance AMPS to WATTS

Multiply AMPS X 120 (AC voltage) = WATTS This provides a close approximation of the continuous load of the appliance.

Multiply WATTS X 2 = Starting Load This provides a close approximation of the starting load of the appliance, though some may require an even greater starting load.

Most often the start-up load of an appliance or power tool determines whether an inverter has the capability to power it.

For example, if you have a freezer with a continuous load of 4 amps and a start-up load of 12 amps:

You would need an inverter with a peak surge rating greater than 1440 watts.

Step-down power inverters are very useful in your truck, not so long ago I changed from one vehicle to another plugged my dashcam into what looked like a 12V socket only to find it was pumping out 24V  and subsequently blew up my dashcam!

A step-down power inverter will allow you to go from 24v to 12v by simply plugging it into a 24v socket in your truck.

This example plugs into a 24v socket and then gives you two 12v output sockets always handy if your a truck driver that relies on 12v devices in your truck. 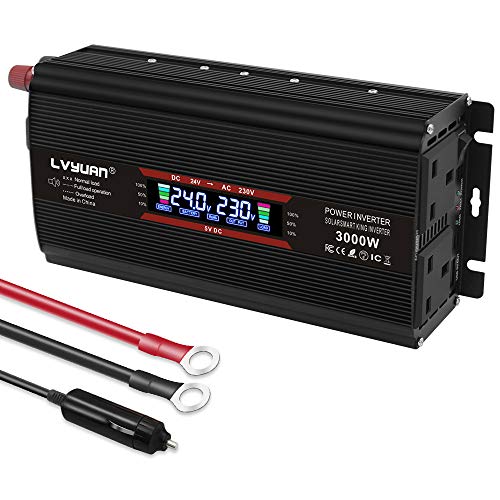 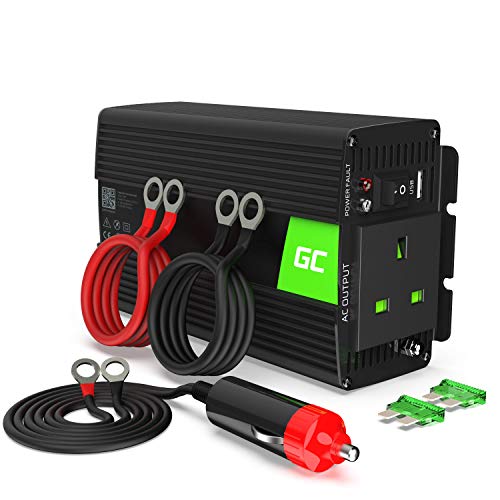 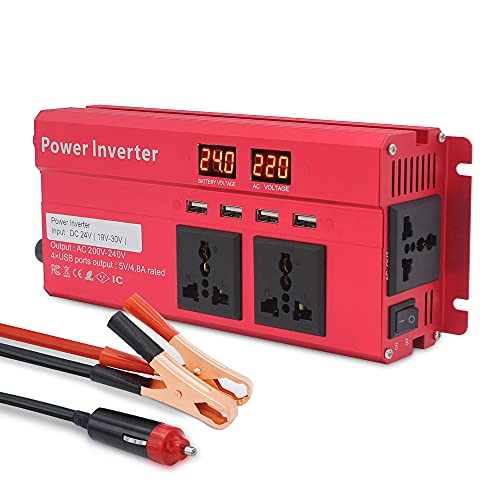 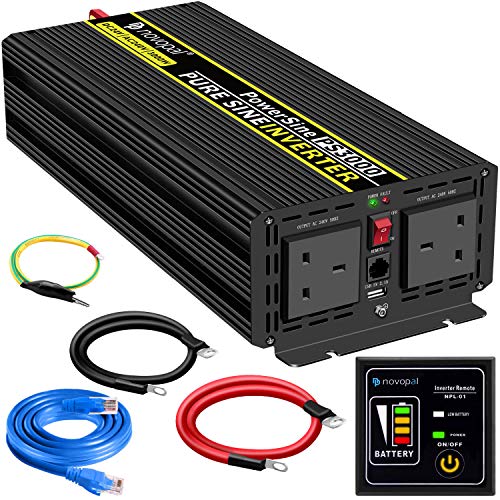 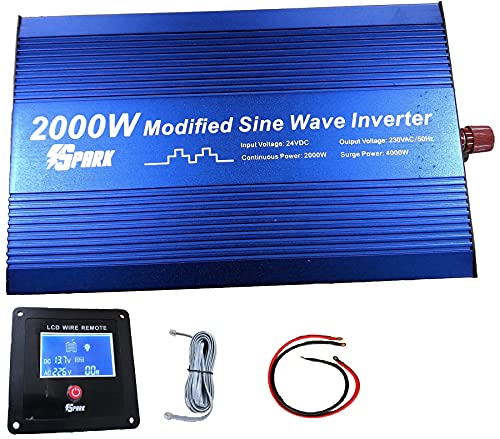 What is the most reliable power inverters for trucks?

The most reliable power inverters for trucks are pure sine wave inverters which provide a more reliable electrical current preventing damage to more sensitive equipment such as laptops and truck televisions.

How big of an inverter do I need to run a microwave?

How big of an inverter can I put in my truck?

British Trucking recommends that a power inverter of 3000 watts or below is suitable for a HGV Truck.

What size inverter do I need to run a TV?

Modern TV sets are a much lower wattage than older type televisions, a modern LCD TV will operate with a power inverter as low as 300 watts, it is always advisable to read the specifications of the TV you want to install in your truck before purchasing a dedicated power inverter. British Trucking recommends a pure sine wave inverter for a TV but they will work fine with a modified sine wave inverter if the TV is powered by a supplied power adaptor.

What does an inverter do in a truck?

Thank you for reading this Article “TRUCK POWER INVERTERS what you need to know !” if you would like to leave a comment of your views please do so below.