If you have been driving in a certain area on British Roads you don’t always see some of the road signs across Britain so it is a good idea to refresh yourself with the many British Road Signs you may come across within your daily HGV driving.

Some images and products shown in this article are affiliate links, we may earn a small commission if you use them, we hope you find the information provided useful.

There is a vast range of road signs in use on British roads, from directional signposts to signs warning of possible hazards ahead, and regulatory signs instructing motorists to perform certain actions to comply with the Highway Code, below we have some great road sign books and our NEW road signs quiz! see if you can get them all right! 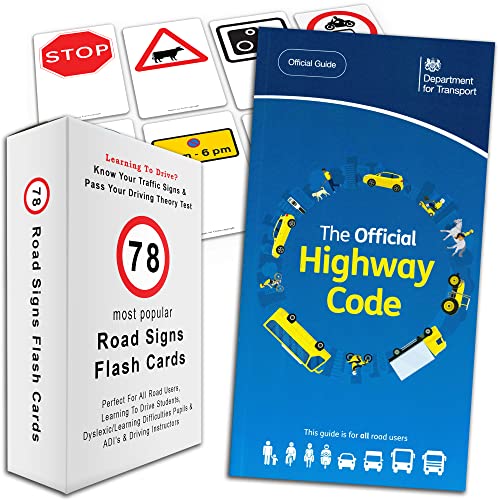 The books below are a handy reference for revising road signs, test yourself on a tacho break to memorize all the different signs, very often questions about road signs are part of the Drivers CPC course so a quick revision can help you get top marks! 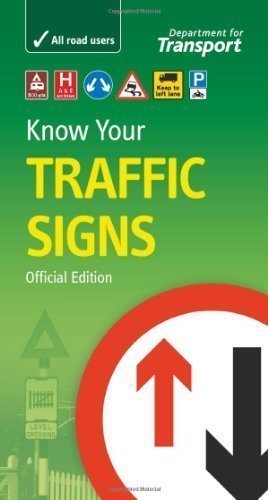 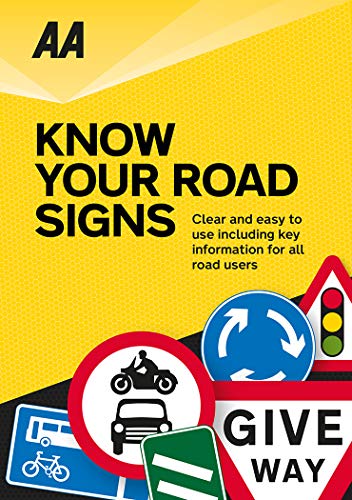 Modern British road signs can be traced back to the development of the “ordinary” bicycle and the establishment of clubs to further the interests of its riders, notably the Cyclists’ Touring Club (CTC), the National Cyclists’ Union (NCU), and the Scottish Cyclists’ Union (SCU).

The rise of motor-powered vehicles after 1896 saw the pattern repeated. The larger motoring clubs, notably The Automobile Association (AA) and the Royal Scottish Automobile Club (RSAC) erected their own, idiosyncratic warning boards and direction signs on a wide scale.

These road signs were interesting in being based on shape, rather than text or image; a white ring (speed limited as marked on a small plate below it); a white (sometimes red) diamond (a “motor notice” such as a weight restriction, given on a plate below); a red disc (a prohibition); and a red open triangle (a hazard or warning).

The latter two could be given detail by the attachment of an information plate below, but often it was left to the motorist to guess what the sign was referring to and local variations as to the definition of what was a prohibition or just a “notice”.

In spite of the confusing beginning, this format of the sign was to develop into the British road sign that was standard from 1934 until 1964.

Following a review of ‘national’ road signage in 1921, a limited number of warning and hazard information plates were enhanced by the use of symbols, rather than simply text.

The symbols were simple silhouettes, easy to ‘read’ at a distance.

Some symbols were peculiarly British: ‘SCHOOL’ (and later ‘CHILDREN’) depicted by the flaming torch of knowledge.

The government was to make more effort to standardise road signs in the Road Traffic Act 1930 (RTA) and regulations of 1933, being finally consolidated with the publication of the 1934 Road Traffic Acts and Regulations handbook.

These saw the end of the very individual black and yellow vitreous enamel AA signs (although the AA was still allowed to erect temporary direction signs, and still does today).

While the RSAC had ceased erecting signs, the Royal Automobile Club (RAC) had begun to do so to RTA specifications and was very active in this respect in the late 1930s.

All signs were to carry information plates mounted below them, the warnings or hazards being illustrated with a wide range of prescribed symbols, but with a text panel below, being only text where no symbol existed.

Lettering and symbols were black on a white ground except for orders (like ‘TURN LEFT’) which were white on blue.

New to the United Kingdom was the first combination sign, which incorporated information on the sign itself, the 30 miles per hour speed restriction (introduced in 1934), with ’30’ in black letters on a white disc surrounded by a red ring.

It was accompanied by its ‘de-restriction’ a white disc with a diagonal black band bisecting it.

Neither of these road signs required separate information plates.

The 1934 RTA&R also clarified direction and distance signage which also remained in that form until 1964.

All signs were mounted on posts painted in black and white stripes, and their reverse sides were finished black, green, or more rarely (usually after repainting) white.

The ‘HALT’ plate was unique in being T-shaped; orders were mainly landscape and warnings were always portrait. Sizes were strictly prescribed, the warning plate being 21 by 12 inches (53 cm × 30 cm) with the surmounting triangle 18 inches (46 cm) equal.

In preparation for invasion during World War II, all navigational signposts and railway station signs were removed, to confuse potential enemy ground movements.

Early road signs were usually cast iron, but this was increasingly displaced by cast aluminum in the 1930s.

Cast signs were designed to be maintained by being repainted with the raised lettering and symbol easily picked out by an untrained hand.

This sort of sign was sometimes given an element of night use by the inclusion of glass reflectors.

An alternative to casting and painting was vitreous enameling on sheet iron or steel.

In the 1950s cast signs were quickly displaced by sheet metal (usually aluminum) coated with adhesive plastics; these could be made reflective, famously by Scotchlite.

Such signs had become almost universal by the reforms of the early 1960s.

The first stage was associated with the first motorway construction project and the development of a signage system for it by the Anderson Committee of 1957.

Although it was additional to the existing signage, it set a number of benchmarks that were developed under the Worboys Committee of 1963 that was largely responsible for the road signage system effected from 1964, which is still current.

Until Worboys, the most notable differences between European signs and those in the UK was their reliance on symbols without text wherever possible, thereby increasing the internationalism of their ‘language’, together with their combined nature, for instance, the warning signs having the symbol inside the triangle instead of on a separate information plate.

The Worboys Committee recommended that such practices were adopted in the UK and the ‘New Traffic Signs’ of 1964 were part of the most comprehensive reformation of the UK streets that the country has experienced.

Unlike previous government efforts to regulate signage, which tended to be cumulative, Worboys argued a modernist position of starting from zero, with all previous signs being deemed obsolete, illegal even, therefore subject to total and systematic replacement.

Order and Prohibition signs were almost all replaced within a couple of years, with the warning and direction signs taking somewhat longer.

The system currently in use was mainly developed in the late 1950s and the early 1960s, with additional colour-coding introduced in the mid-1980s. There were three major steps in the development of the system.

As part of an effort to eliminate sign clutter in the mid-1980s, a colour-coding system was developed to indicate information pertaining to different categories of routes on a single sign.

The system became known as Guildford Rules, after the town of Guildford, where experimental versions of this signing system were tested.

Road signs in the United Kingdom are governed by an extremely complex and detailed set of guidelines.

The basic units of measurement used by sign designers are the ‘x-height’ (the height of the lower case letter ‘x’) and the ‘stroke width’ (sw) (4 sw = 1 x-height).

The sizes of borders, symbols, and arrows and the spacing and layout of the sign face are expressed in sw, so that all the elements remain in proportion.

The x-height of a sign is dictated mainly by the speed of traffic approaching it, hence 300 mm x-heights are common on motorways, whereas parking signs are mostly at 15 mm or 20 mm x-height.

From March 2015, all new height and width restrictions are to have dual metric-imperial units.

This is because of the disproportionate number of bridge strikes involving foreign lorries (between 10 and 12% in 2008).

This was not however included in the 2011 amendment to the TSRGD. In November 2014 it was announced that all new height and width restriction signs installed from March 2015 would have dual metric-imperial units.

Road signs in the United Kingdom are categorised as:

Thank you for reading this Article “Truck Drivers Road Signs Refresher” we hope you found it useful and enjoyed trying out our British Trucking Road Signs Quiz! In this article, we are going to navigate our way around one of the best satnav systems for Truck Navigation in the UK, the Truckmate Snooper S6900 system. Designed specifically

Looking for the best underwear for trucking? driving a truck for long periods in hot weather can take its toll on a driver, in this article we take a look