It can be a huge challenge getting your head around HGV Truck driving hours and regulations.

The intricacies of these regulations can be very difficult to understand, Of course, they’re in place for a very good reason, the safety of drivers and those around them.

Firstly a truck driver can get no less than nine hours’ daily rest within a 24-hour period up to three times a week.

This means that truck drivers can work three 15-hour days within the space of a week. 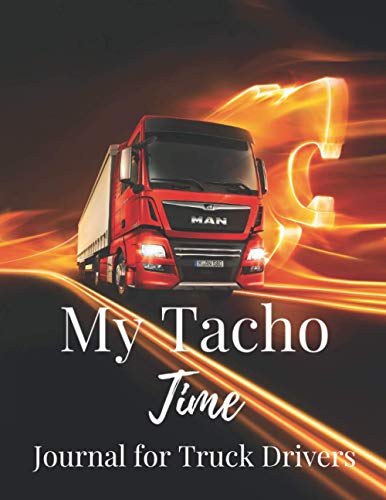 My Tacho Time, Journal for Truck Drivers: Hours and miles/km logbook for truck...
£6.84
View on Amazon

The regulations stipulate that drivers can only drive for four-and-a-half hours (either continuously or in successive periods) before taking a statutory break of at least 45 minutes.

This break can be split into two, provided the first break is at least 15 minutes, and the second part at least 30 minutes.

The overall weekly driving limit is a maximum of 56 hours.

The standard maximum daily driving time is nine hours a day, although there is a dispensation to increase this to ten hours within the space of a single fixed week.

The maximum driving time over a single fortnight is 90 hours.

Therefore, if a truck driver drove 56 hours in one week, he must have driven only 34 hours in either the preceding or following week.

Ordinarily a truck driver must take a minimum of 11 hours’ rest between working days in every 24-hour period
However, this can be lowered to at least nine hours a maximum of three times between two weekly rest periods
Drivers can work three 15-hour days within the space of a week
Furthermore, daily rest periods can be taken in two separate periods, so long as the first is a minimum of three hours and the second a minimum of nine.

An HGV truck driver must have a weekly continuous rest period of 45 hours.

While this can be reduced to 24 hours in one week, every driver must have at least one 45-hour break over the course of a fortnight.

Where a weekly rest period has been reduced, it must be compensated through the addition of another rest period of nine hours.

This must be done by the end of the third week following the week concerned.

Where vehicles are double-manned in other words, having two drivers both drivers must get at least nine hours’ rest each within 30 hours, allowing them each to be on duty for a maximum of 21 hours.

Those drivers making national or overseas trips involving the use of a ferry or train may interrupt their mandated rest period to embark and disembark from the ferry or train, or to perform any customs requirements.

They may do this once or twice for up to one hour.

Drivers pay must not be linked to distance traveled, unless this specifically does not encourage drivers to overwork, truck drivers must not be offered more pay the further they go, as this may risk encouraging them to breach the statutory requirements relating to working or rest periods.

Drivers may exceed driving times to reach a suitable stopping point in the event of an emergency, provided that road safety is not at risk as a result.

Most vehicles used for the transport of goods where the vehicle’s maximum permissible weight exceeds 3.5 tonnes (including trailers) and where the vehicle is used within the UK or traveling between the UK and EU/EEA countries, or Switzerland – are subject to EC Regulation 561/2006.

The Transport Act 1968 applies to those vehicles exempt from this due to the type of work they do or their size.

Drivers subject to the terms of this legislation are restricted to (a) up to 10 hours’ driving per day and (b) up to 11 hours’ duty per day.

Those drivers who drive for less than four hours a day are exempt from the 11-hour limit.

It should be noted, however, those truck drivers who undertake mixed journeys may be subject to both the Transport Act and Regulation 561/2006 within the space of a single working day.

Operators and drivers alike are liable to prosecution for breaches of driver working hours regulations. The former may also be prosecuted for the actions of agency drivers in this regard.

The maximum fine for each offense is £2,500, while operators may have their operator license suspended, curtailed, or even revoked.

Drivers too may be subject to licensing curbs.

Drivers who repeatedly exceed working hours restrictions may be called to give an account of themselves to the Traffic Commissioner.

You must not drive for more than 10 hours in a day:

on a public road
off-road if not during duty time

Off-road driving counts as duty time if it’s for:

You must not be on duty for more than 11 hours on any working day.

This limit doesn’t apply on any working day when you don’t drive.

The main EU rules on driving hours are that you must not drive more than:

All driving you do under EU rules must be recorded on a tachograph.
Breaks and rest

The main points of EU rules on breaks and rest are that you must take:

If you work partly under EU/AETR rules and partly under GB domestic rules during a day or a week you need to know the following:

You must follow the GB domestic limit of a maximum of 10 hours driving a day. But at any time when you’re actually driving under the EU rules, you must follow all the rules on EU driving limits.
Other duty limits

You must follow the GB domestic limit of a maximum of 11 hours on duty.
Rest periods and breaks

You must follow the EU rules on rest periods and breaks on days and weeks when you drive under EU rules.

You don’t need to take a weekly rest period in a fixed week where you don’t drive under EU rules.

Disclaimer – The information offered in this article is a representation of driver hours laws at the time of publishing, you should seek independent advice or reference the government’s website for any recent changes.

Thank you for reading this article “Truck Driving hours and regulations UK” if you would like to leave a comment on your views please do so below.