Roadside Checks on your HGV vehicle

Firstly as a HGV driver, you may be asked to stop by the police or a Driver and Vehicle Standards Agency (DVSA) officer who can perform HGV roadside vehicle checks.

Both the Police and DVSA can stop HGV Trucks, vans, buses and coaches.

Both have the power to carry out spot checks on your vehicle and issue a prohibition order if necessary.

A prohibition prevents you from driving your HGV (Heavy Goods Vehicle) until you get a problem with your vehicle fixed.

Also the Police and DVSA can issue fixed penalties if you commit an offence.

These can be graduated depending on the circumstances and seriousness of the offence.

Most noteworthy It is your your responsibility to make sure your vehicle is roadworthy.

How do I recognise a DVSA officer?

DVSA officers wear yellow HIGH visibility jackets with either the VOSA or DVSA logo, and they always carry a DVSA warrant card.

DVSA vehicles are marked with a black and yellow print on the side and either a VOSA or DVSA logo is situated on the bonnet.

What happens If I am stopped for HGV Roadside Vehicle Checks?

The vehicle checks can be carried out either at the roadside or also at dedicated testing centre or site.

The checks are made on HGV’s to keep unsafe vehicles off the road.

The officer checks that the HGV vehicle is not breaking any rules and regulations.

Your HGV vehicle could be impounded if you commit a series of serious offences.

If you are carrying a high-value load you may keep your engine running, doors locked and windows closed until you are sure you’ve been stopped by a genuine police or DVSA officer.

Not stopping when asked to by a uniformed officer is an offence.

The failure to stop incident will be officially recorded and you’ll be interviewed at a later date.

You could then face court action or be reported to the Traffic Commissioner, who could remove or suspend your operator’s licence.

Making sure your HGV is roadworthy

You are responsible for maintaining the roadworthiness of your HGV vehicle.

This will help avoid problems with vehicle checks.

You must ensure your vehicle is safe to drive before starting a journey.

You should carry out a walk-around check of the vehicle before your journey.

Things you should Check

You are also responsible for reporting any defects in writing to the person in charge of sorting out your vehicle defects.

To keep a record of any defects a Vehicle Defect book should be kept in your cab.

Each defect book should have 3 copy pages for each day, the top copy will be removed and handed into the relevant person, the second page remains in your vehicle as a record if you are stopped and the third copy will be signed off by the workshop who puts the defect right. 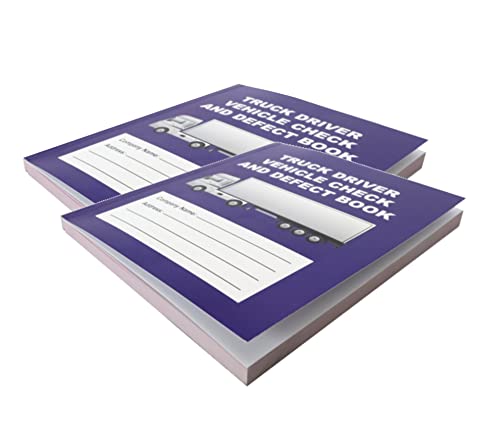 As a HGV operator must carry out safety inspections before you use a HGV vehicle for the first time, this applies even if you are leasing, hiring or borrowing a vehicle.

What Checks an Operator must carry out

A prohibition can be issued by a police officer or an officer from the Driver and Vehicle Standards Agency (DVSA).

You could get an immediate or delayed prohibition which depending on how dangerous your vehicle is before the faults are put right.

If you have an immediate prohibition it is likely your vehicle will be immobilised and you will no longer be able to drive it!

You could also be prosecuted for operating a dangerous vehicle.

If you have a prohibition with a delayed effect you will be able to drive the HGV vehicle away and the operator will have up to 10 days to get it repaired.

After this time the vehicle will then need to be reinspected and the prohibition removed before it can be used on the road again.

If your HGV vehicle is overloaded then you will be issued with an immediate prohibition notice and your vehicle may be immobilised.

Examiners can also direct the vehicle to somewhere nearby, where the load can be redistributed or removed.

A copy of the prohibition notice will be sent to the owner or operator of the vehicle.
Road-worthiness prohibition (PG9)

This prohibition notice is given for mechanical problems or for the condition of a vehicle’s bodywork and equipment.

It could have an immediate or delayed effect depending on how severe the defect is.

This is issued when the examiner believes a severe defect is due to significant breakdown in the vehicle’s maintenance procedures.

You would not get this type of prohibition for any defects you could not have known about before your journey.

You may receive an ‘S’ marked prohibition if the vehicle examiner believes there has been a significant breakdown in the maintenance procedures agreed as part of the operator’s licence.

This prohibition can start immediately and you or the operator could be prosecuted.

DVSA will follow up with an assessment of the operator’s vehicle maintenance procedures.

You could receive this if an immediate problem with your vehicle has been temporarily or permanently fixed at the roadside but others remain.

You can return to your operating centre or garage to permanently repair the initial problem and other faults.

You receive this if you have not followed the rules for drivers’ hours and tachographs.

You will usually be fined – but you could also be prosecuted or have your vehicle immobilised.

This is issued when there is a problem with carrying dangerous goods.

Fixing the found problem is usually enough to get the prohibition lifted.

If you disagree with a prohibition

If you disagree with an issued prohibition order You can complain to the local police force or DVSA office that issued you the prohibition.

Thanks for reading this Article “HGV Roadside Vehicle Checks” we hope you found it interesting. (Featured Image Attributed to Chris Sampson under creative commons license)

The UK government has paused its rollout of smart motorways until 5 years of safety data is available. The UK Department for Transport (DfT) has welcomed the Transport Committee’s report,